Learning from a Shipwreck 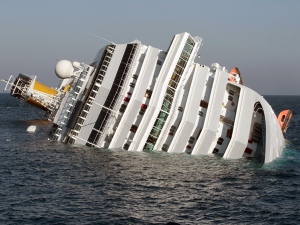 In the last week we followed the story of the Costa Concordia disaster, the cruise ship that partially sank after hitting a reef off the Italian coast. When I first heard about it, I could not understand how this was possible: We know that this kind of ships has a very well planned route, which should leave no risk for such a disaster. And we also know that with current technology it is very easy to provide alerts in the case a ship deviates from its planned route.

But then we learned that the captain had intentionally modified the ship’s route, apparently just to please some of his friends. And he certainly also ignored the alarms that followed this change in the route:

“Costa Cruises CEO, Pier Luigi Foschi, stated that the company’s ships have computer-programmed routes and alarms, both visual and sound, if the ship deviates by any reason from the stated route as stored in the computer and as controlled by the GPS, but that these alarms can be manually overridden.”

This sad story makes me think about failures in software projects. As experienced software developers, we know that there are many risks involved when implementing a new system. We try to avoid failures by having:

However, what the Costa Concordia disaster teaches us is that these plans and alarms are only effective if the people executing them have discipline. A successful execution cannot be guaranteed by good plans alone; it depends on the ability and skills of the people implementing it. And for this reason, when choosing the right software developers for your team, you should always look for the best.

Veteran software developer, enthusiastic programmer, author of a book on Object-Oriented Programming, co-founder and CEO at KashKlik, an innovative Influencer Marketing platform.
View all posts by Hayim Makabee →
This entry was posted in Efficacy, Hiring and tagged Efficacy, Hiring. Bookmark the permalink.

6 Responses to Learning from a Shipwreck