How I lost during 7 years. And then I won. 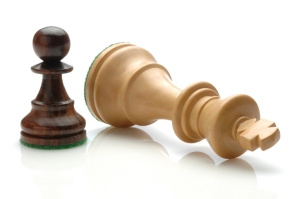 My father started teaching me chess when I was seven years old. He never let me win, as most people normally do when they play against small children. He would always play seriously, making me understand that my purpose was to learn, and not to win.

Of course as any seven years old boy I wanted to win. It would be an amazing victory for me to defeat my own father. But I also understood that he played much better than me, and that I still had a lot to learn from him.

So I kept playing, and kept losing, and kept asking to play again. The years passed, I still was not able to defeat my father, but I learned a lot and played much better than most my friends at school.

Finally, at age 14, it happened for the first time ever: I won a chess match against my father. And I knew that I really won, it was clear that I played better than him.

Of course we continued to play together, and now as we played my victories became more and more frequent. By age 15 I could play as well as my father, and then we started playing with a clock.

My father taught me much more than playing chess. He gave me a life lesson about how to work hard to reach my goals.

Veteran software developer, enthusiastic programmer, author of a book on Object-Oriented Programming, co-founder and CEO at KashKlik, an innovative Influencer Marketing platform.
View all posts by Hayim Makabee →
This entry was posted in Efficacy and tagged Efficacy. Bookmark the permalink.